There’s no shortage of television movies based on famous figures, but rarely a photographer. One that you may not have seen is, Double Exposure: The Story of Margaret Bourke-White. The 1989 production stars the late Farrah Fawcett in the lead role. It was the first feature film made by TNT. It did very well in ratings, no doubt more to do with the presence of Fawcett than the photojournalist she played. While Bourke-White was considered something of a looker in her day, she was certainly no Charlie’s Angel! Based on Vicki Goldberg’s biography, the film touches on most of the major aspects of her career and personal life. Her second husband, author Erskine Caldwell, figures prominently. Even now the movie holds up well, and Fawcett’s performance was generally very well received. 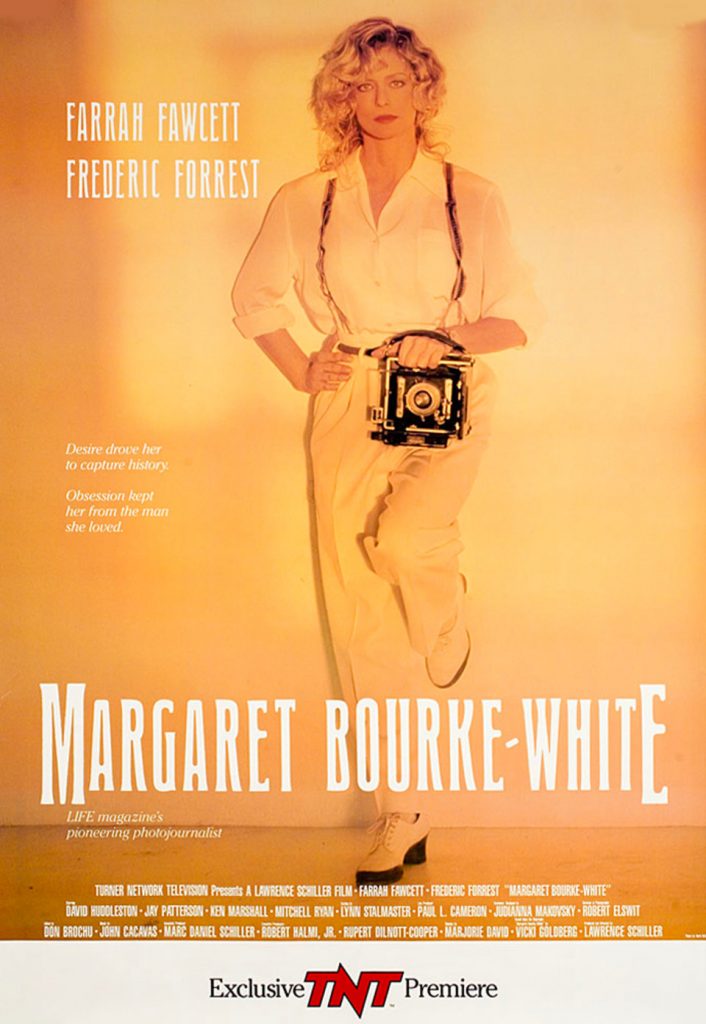 Born in the Bronx in 1904 and raised in New Jersey, Margaret Bourke-White first became familiar with photography at a young age through her father. He was obsessive about optics and photographing things industrial, so much so that he didn’t offer much to Margaret other than the chance to carry his equipment. The only “pictures” she took before taking a college course at Columbia and then Cornell, were pretend – by using an empty cigar box to mimic her father taking landscapes of steel and concrete. She did help a bit more in their ‘darkroom’, where they developed photographs in the tub. The first time Margaret was allowed to use her father’s camera, wasn’t until after his death in 1922.

At Cornell, Bourke-White immediately displayed her natural eye for what makes an image stand out. In fact, it was shooting the school’s campus and Ivy League buildings that earned her not only praise, but money from the Alumni News. Instant pro. This small early success gave the unabashed young woman the confidence to aim higher. In New York City, she visited a well know architect’s office unannounced, and showed him her portfolio. He was duly impressed, and told her she was good enough to work for any architectural firm anywhere. So, she chose Cleveland!

Because that’s where the big steel mills were. Steel mills that barred women from entering, which pissed her off. She was fascinated by the mills and the industrial wasteland known as “The Flats, that reminded her of those days with her father. Moreover, she was not only determined to be allowed into the steel mills, but to be the first professional to photograph them. Her efforts here are shown early in the film, and lay the groundwork for this intrepid, determined and creative personality. It was the steel mill images that caught the attention of Henry Luce, the publisher of a new magazine called, Fortune. It was Luce, in the summer 1929, who offered her a full-time job as a photographer. Her task – “Tell the entire story of American industry.” Gee Henry, is that all? Piece of cake. 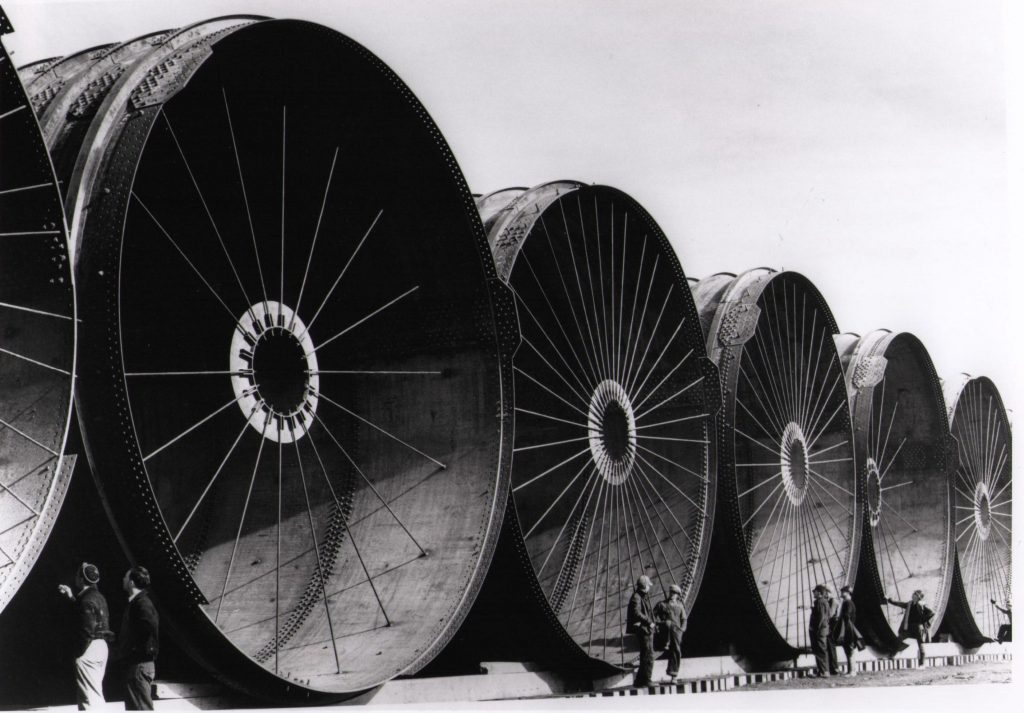 The 1929 stock market crash opens the second act of Double Exposure. This marks the beginning of her transition from industrial photographer to photojournalist. Later she meets author Caldwell (Tobacco Road) at a swanky black-tie event. The two end up having dinner together. Caldwell, played very well by Frederick Forrest, is quite critical of her. Says that she, “shoots things, not people.” He wants to see how she will react. Defiantly of course, declaring that there are people in her images and that if she wanted people as main subjects she could do it as well as anyone. Just what Caldwell wants to hear. He has a book project in mind, a non-fiction book telling the human story of the great depression they were now in the midst of. He would write it and she would shoot it. The book, You Have Seen Their Faces, would be published in 1937.

Together Bourke-White and Caldwell hit the road in the American South, with Caldwell’s female assistant. I won’t spoil it, but let’s just say the trip is rocky and not very successful. At first. He is not happy about her posing subjects so she can get a better composition. He tells her she should be like a “fly on the wall”. She barks back, “Why didn’t you tell me that’s what you wanted, I can be a fly on the wall!” And with that her people images begin to get better, to capture versions of reality as they existed, not as the photographer shaped them. She never completely stopped “shaping” during the course of her career, however. If a little lie was necessary to tell a deeper truth, she did not hesitate. 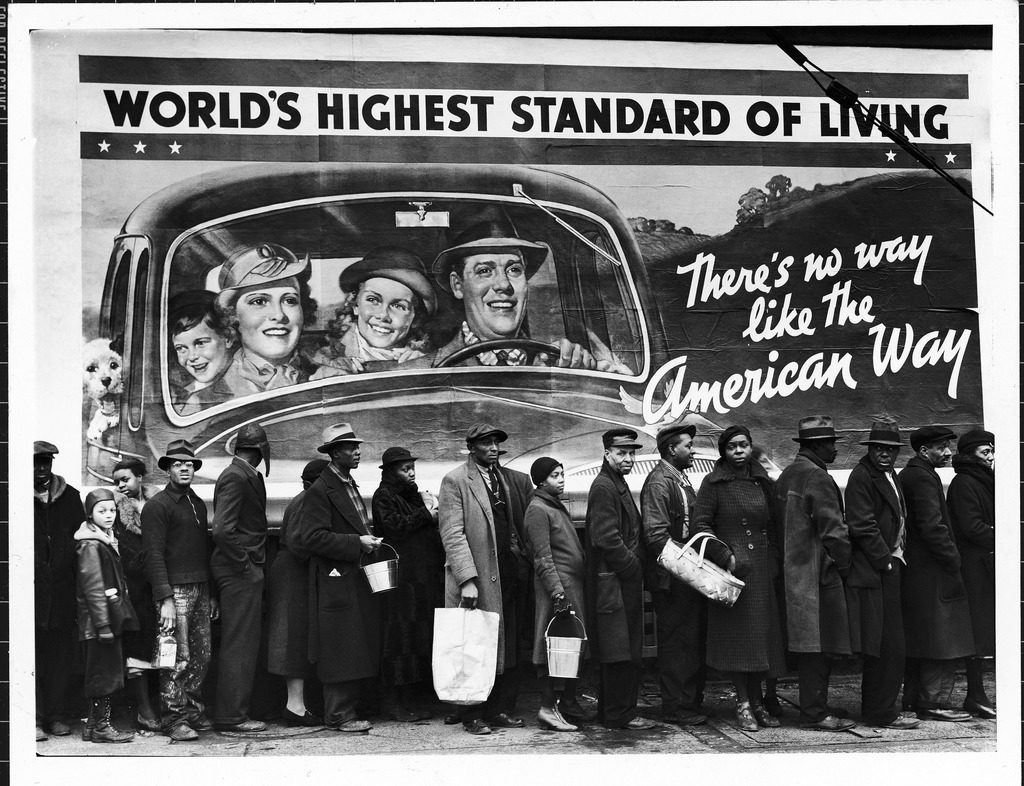 It is the unfolding of the Caldwell – Bourke-White relationship that provides the through line for the film, weaving the personal with the professional. At first viewing this through line annoyed me a bit. I wanted to see more photography action and less relationship turmoil. But during the second viewing I understood more clearly how critical Caldwell was in the evolution of her legendary career, whether positive or negative, witting or unwitting. He was there at the major turning points and was always part of the calculus in her catalyst forward, even when he was trying to drag her backward. Perhaps especially then.

Director Lawrence Schiller bookends the film with Bourke-White covering World War II as the first female combat photographer in history. The opening scene is at the Italian front where she gets shelled while undergoing sexist scrutiny from no other than General George S. Patton. Ducking for cover with Patton, she drops her camera.  When she reaches out to haul it in, Patton says, “C’mon, you really gonna risk your life for some goddamn camera?” She grabs the camera. Along with Patton’s respect. 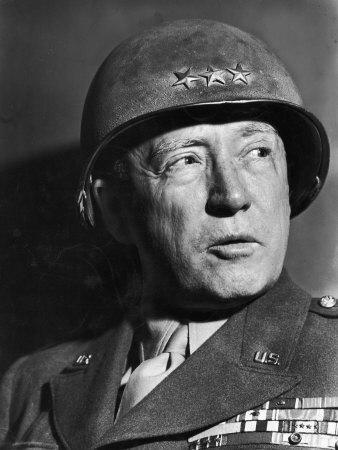 Bourke-White was a most notable photojournalist for many reasons, some already touched on. Her determination was almost super human. You don’t become the first photographer to be allowed into the Soviet Union after WWII, or have your visa personally signed by Joseph Stalin, by taking ‘no’ for an answer. You don’t get picked out of a gaggle of press photographers to photograph FDR in the Oval Office by being a shrinking violet. But perhaps chief among her abilities, at least according to this humble scribe, was her storytelling. Not just within a classic Life photo essay, but within a single frame! She had a remarkable skill for layering her images with key elements in the foreground and/or background of the main subject, thereby making such frames worth a ‘thousand words’. Or more. 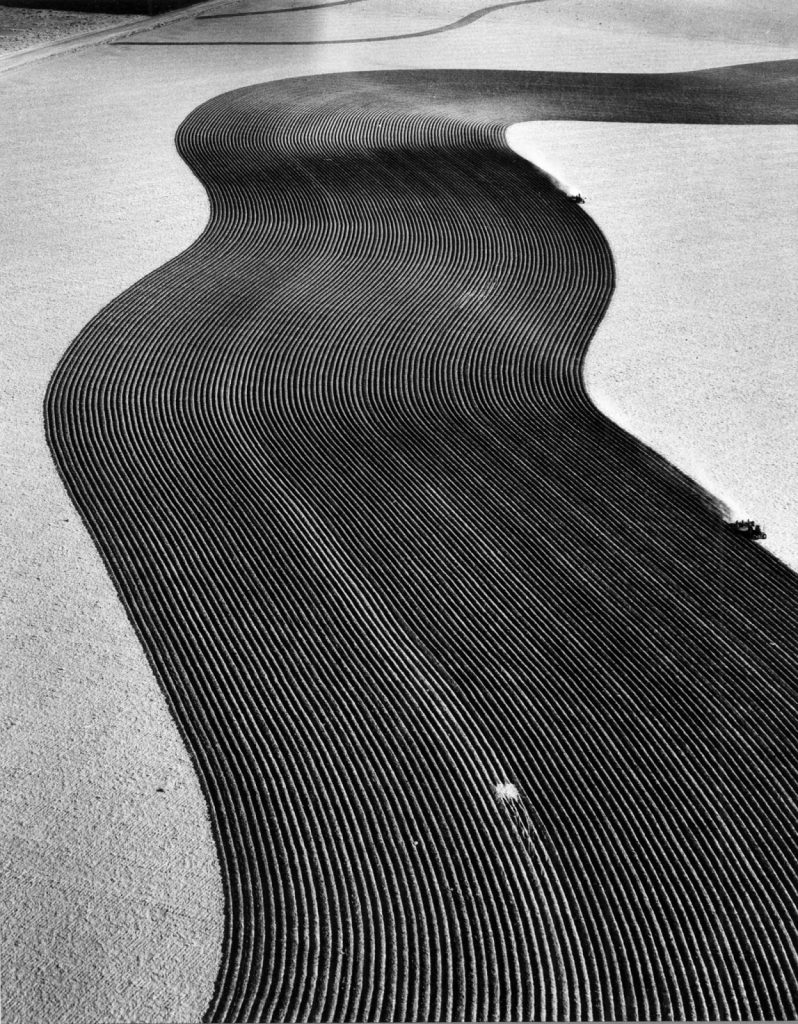 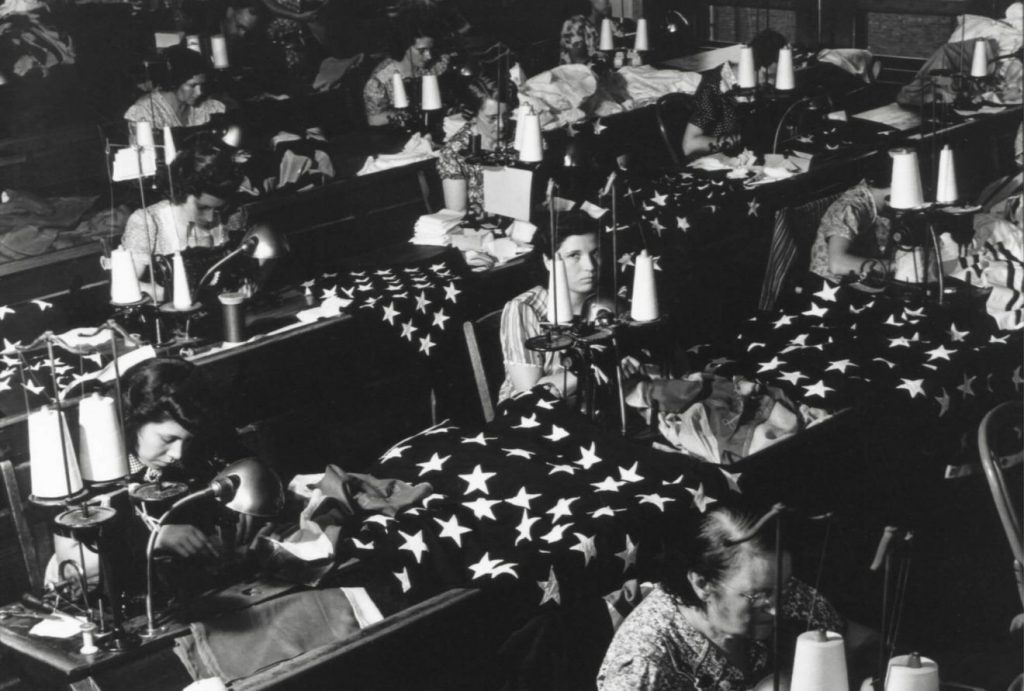 The image below of Mahatma Gandhi and his spinning wheel was taken in 1946 while working for Life magazine. Life’s editors didn’t initially publish it, and it wasn’t until Gandhi’s assassination in 1948 that it began to be seen as iconic. 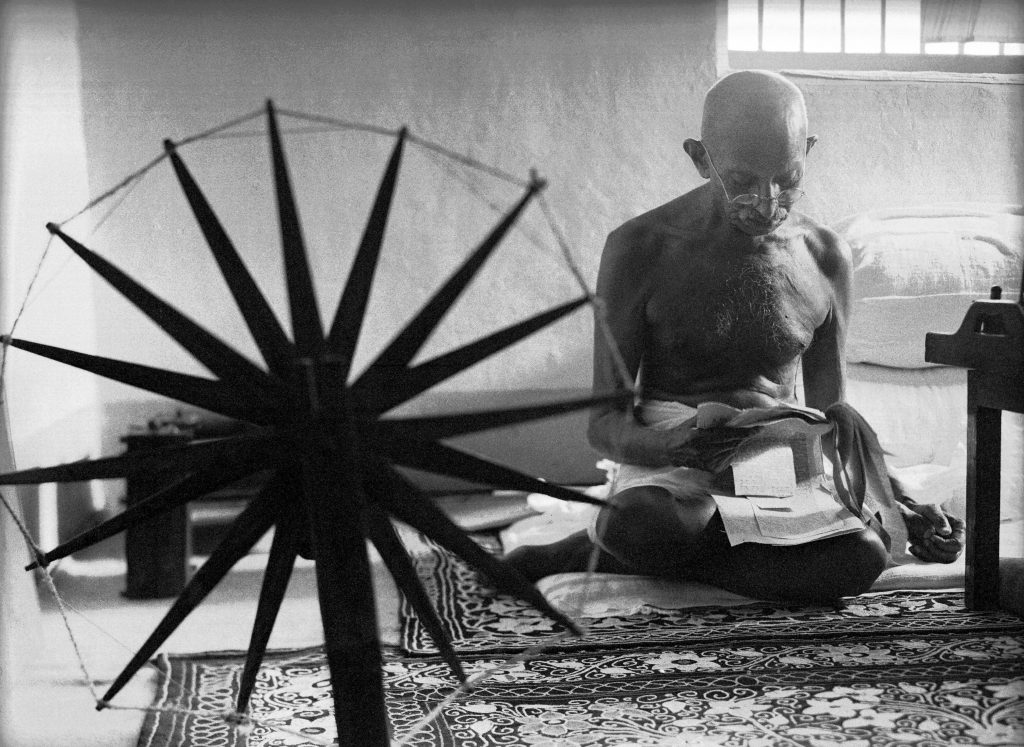 Schiller has clearly worked hard to get across the feel of that remarkable time period, and how Bourke-White was a trailblazer for contemporaries like Dorthea Lang,  and the women who would come after her. If you’re a photographer, you’ll especially enjoy seeing how photography was done in this time period.

But it also works as a study of celebrity and sex, and how they can be both a negative and a positive influence on one’s work. For some it can lead to destruction. But the indomitable will of Margaret Bourke White powered through the negatives, often turning them into positives. Taking full advantage of her advantages was a natural part of her unflagging desire to do great work.

The closing scenes and images of WW II depict Buchenwald survivors at war’s end. These are the most powerful and crystalizing moments of the film. Just in time. At Buchenwald, Patton is there. He shows her inside a Nazi HQ where they have committed suicide by cyanide. Before they killed themselves, they killed their children. Margaret is clearly disturbed as she looks at their lifeless bodies, dressed in their Sunday bests. Her eyes don’t leave them as she says firmly, “Get me my camera”.

George J. Newton is a writer with Write my assignment and Thesis writing service, where he covers film and entertainment. He has a keen interest in photography and film in general.

Go here for the Luminous List of outstanding photographer documentaries. 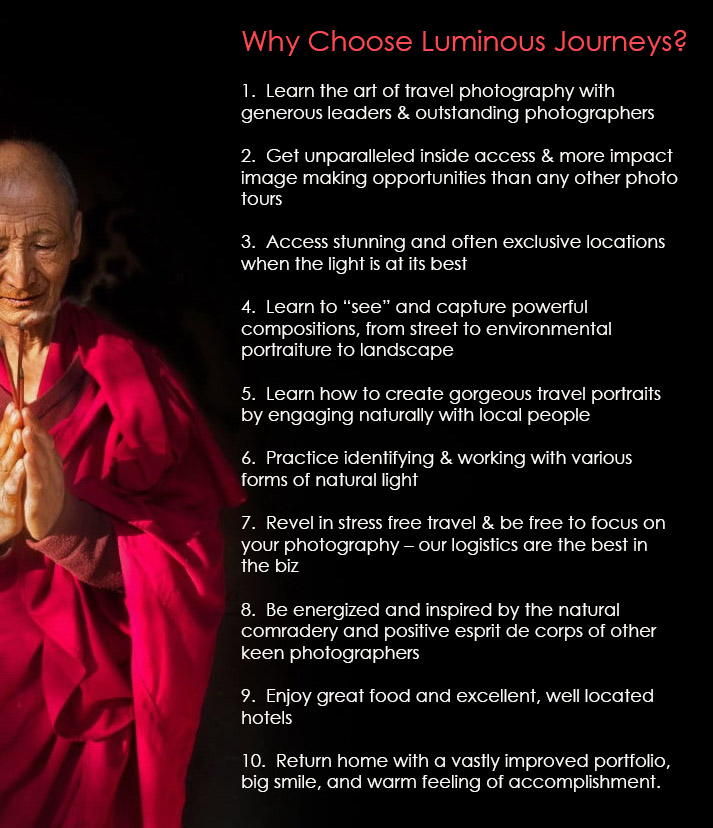