Creating a Bali photo tour isn’t as easy as it might sound. Even paradise has its challenges. Three return trips to Indonesia in 2014 followed by years of ever evolving workshops have resulted in the most image packed shooting schedule in the history of Bali photo tours – of this we are certain! It’s not just Bali of course, as back in the early days we included underwater photography on Menjangan, the brutal climb & shoot of sulfur workers inside the Ijen Volcano, and the seaweed farmers of Lembongan.

This was and is not your father’s 1-day Bali photo tour – and it’s not for tourists looking to laze around and sip severely overpriced umbrella cocktails while taking a few snaps. This baby is for photographers! Novice to pro, it doesn’t matter. What matters is the strong desire to find and make some truly fantastic images that are available nowhere else in the world. Part 1 will only cover the introduction and first shoot on Lembongan, while Parts 2 and 3 will cover more territory.

Back in 2014 the Luminous Journeys Bali team – David Lazar, Rarindra Prakarsa, Pande Sura, Dukun Jawa and yours truly Bennett Stevens – got together on Bali to scout locations and work through a demo-tour. The demo-tour ran all things logistical & photographic through their paces. It was easy for Pande and Dukun who live there to get there, but Rarindra flew in from Jakarta, David from Australia, and Benn from Thailand.

The challenge of this photo tour from its conception was to gain true insider access off the beaten path, while at the same time offering the absolute best image making opportunities on the island. On such a relatively small island with nearly 4 million inhabitants, we didn’t know if it would be possible. We did know it would mean eliminating several major tourist stops.

The first locations to get the ax were the overcrowded Bali icons of Kuta, Tanah Lot and Ubud. (free time in Ubud for shopping at the end of the trip was later added.) The tourist throngs at these places render them unsuitable for our purposes, and the traffic jams would test the patience of even the most dedicated of photographers. The tourism culture is simply not the part of Bali we are interested in, except in avoiding it!

Our original starting point on the schedule was at a 5-star secluded villa in the highlands of central Bali, north of Ubud. We thought we’d blow people’s minds right off the bat, while at the same time only dipping our toes photographically as people got over their jet lag. But once we found out firsthand how demanding the pace was, climaxing with the Ijen Volcano trek & shoot, we KNEW the villa would serve everyone far better as a well-earned reward at the end of the tour instead. So we scrambled our brains and flipped the itinerary, moving the pieces of the puzzle this way and that until we found something that made us smile with satisfaction. Don’t get us wrong, there is a lot of shooting to be done at and around the villa & environs, it’s just that it’s more relaxed and completely voluntary. 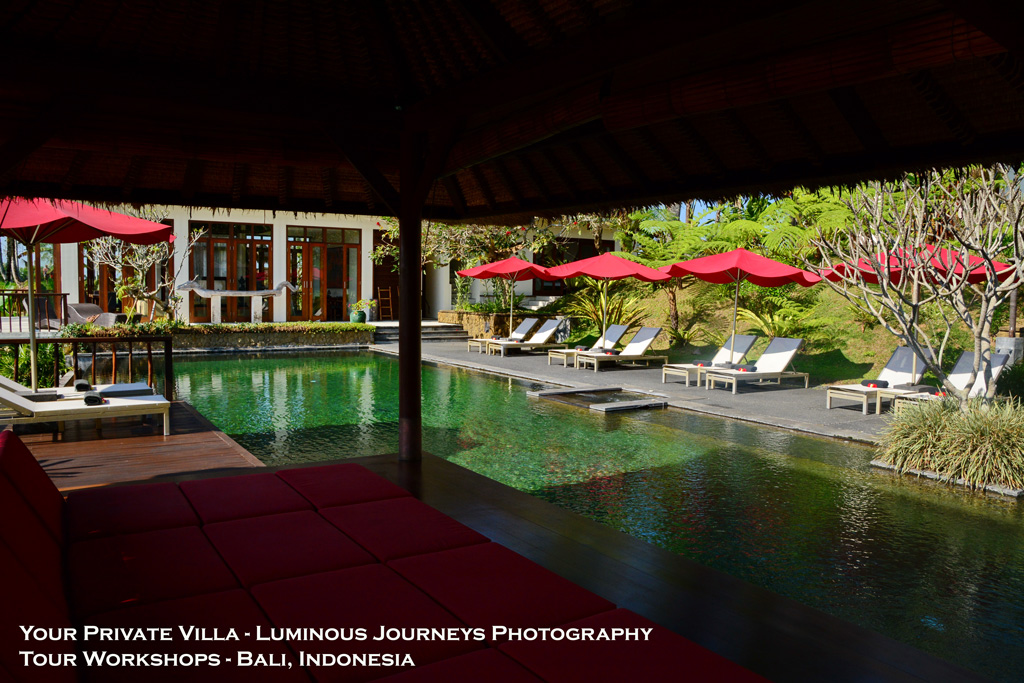 The new starting point became Bali’s former tourist capital, now frayed about the edges, the coastal town of Sanur. We found a beautiful hotel in a great location on the beach with a brand new wing and very cool, two-tiered swimming pool. Sanur was perfect in that it was not overcrowded, not far from the airport in Denpasar, and the nearest jumping off point for Lembongan Island. Even though the island is no longer part of the main tour, I include it here for anyone interesting in hopping over sometime.

Lazar and I made the Lembongan trip without the others, expecting an hour and half on the sea that turned out to be only 30 minutes. Long enough though for the young man seated in front of us to toss his seafood salad all over the chest of his adjacent friend. Without warning! Everyone took it very matter of fact, even the target, who had no choice but to sit there covered in gut-goop until we reached the island several minutes later.

Once landed we were quickly met by “island prices”. A $2 ride in the back of pick-up was $8, which we brilliantly negotiated down to $6. Seven minutes of pitted road later we arrived at a shallow inlet covered in green “fields” of seaweed being farmed, large breakers crashing on the outer border. We had seen no photos of the waterscape previously, and were quite excited about what lay before us, which was quite unique to our experience.

The only hotel here, consisting of eight small bungalows and a swimming pool overlooking the scene of seaweed farmers farming and hauling double-barrel baskets slung across their shoulders, had just recently opened and looked very inviting. It was “island priced” of course, (everything but beer & food we learned was at least double on Lembongan), and so I was glad there was only one bungalow left! The ever polite Lazar volunteered to sleep on the extra mattress on the floor, and I of course thought it would be impolite to refuse…

Following a promising late afternoon shoot spent figuring out the ‘lay of the bay’ and the best way to photograph the farmers in their habitat, Lazar and I spent dusk to dark in the pool drinking Bintang and enjoying getting cold! Between the dark and the clouds and the cool pool and the wind whipping up, being cold in the tropics was an unexpected pleasure.

Laguna Reef is a family run operation, its bungalows new and clean and nice. Hubby runs the bookings, and as the only place to stay on the bay, isn’t interested in negotiating. On Bali booking a group of 12 usually gets you a discount. Here it got us advice that would amount to a discount – book now at this price or it will be more next year! It was the same with dinner. The Missus, serving as both waitress and chef, wasn’t familiar with group discounts, nor did she need to be. The food was both very good, and reasonably priced. She was clearly happy the family investment was turning out to be so well received. Whoda thunk, after a century of nothing, that a few bungalows overlooking a bunch of seaweed would bring paying customers? The place had been open only a few months, and we hadn’t known it existed until we washed up on the island. FYI, from her we learned this little known factoid – there are roughly 1,500 natural born Lembongans living on the island, along with 300 or so Balinese.

Lazar’s watch went off at its usual zero-dark-thirty. At dawn the tide was low, but the vast seaweed beds were still untended, save for millions of tiny sand crabs. It was cloudy but the sun was shedding shafts of light here and there. The farmers, when they first trundled intermittently down the steps from their sorting shacks, seemed at first bemused, then amused at the sight of two camera toting foreigners on the scene before they were. What could possibly be so interesting? Didn’t they get enough yesterday? The bungalows’ other guests, we had noticed, seemed content to lay by the pool and take a few snapshots.

The morning shoot was good. Good and challenging. The farmers were generally friendly and didn’t mind us being there, though one or two used body language that let it be known they were less than thrilled. Comes with the territory. The challenge was of course getting in position to make compelling images in good light with people in constant motion. The footing was often through shallow water over old dead coral which had my feet screaming for days afterwards. Sandals recommended! The seaweed is collected in small boats, the bad parts picked off, and then loaded into large woven baskets. The women, often in their 60’s, will carry one basket-full from boat to beach and up the stairs to the final sorting area. 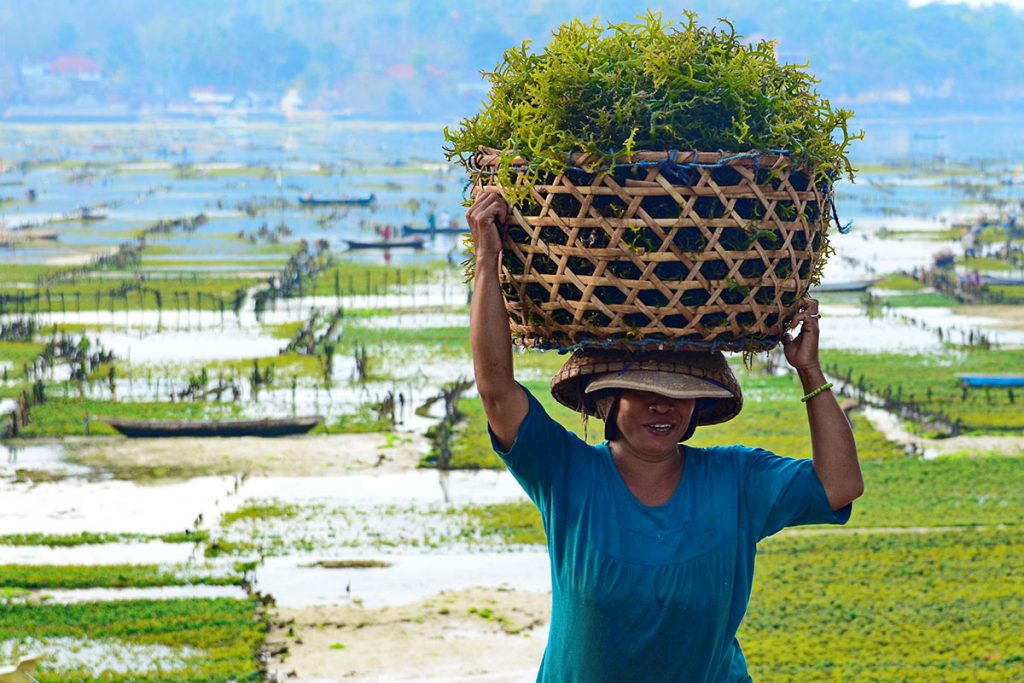 “Selamat pagi!” I said to one nice lady climbing the stairs, who smiled under her basket and returned the greeting. She was so casual about it I thought nothing of her burden. When she came back down and got another load ready, her husband wasn’t around. So she looked at me standing there like a dope looking for an image. Helping lift the basket onto her head – how much could seaweed weigh? – I couldn’t believe how heavy it was! 70 kilos I was to learn later, 154 pounds! Close to double her bodyweight. At 6’3, 210 pounds, she had me feeling like the proverbial a 98-pound weakling. The men carry two baskets (over 300 lbs.) hanging off both ends of a flat-wood “pole” bending across their shoulders.

Yep, Lazar and I were definitely happy. This was quite a scene visually, and a great free shoot documentary challenge in so short a time. Lembongan made the “Bali photo tour” cut with flying colors, but regrettably had to be cut after the first year. 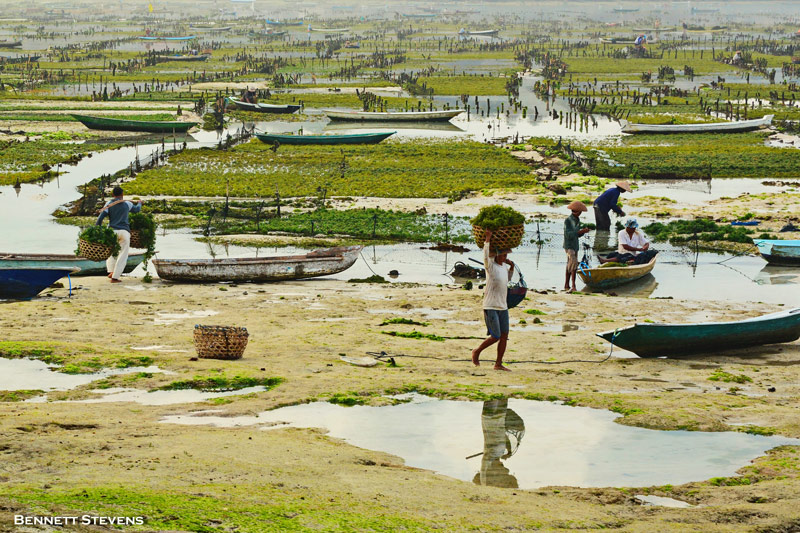 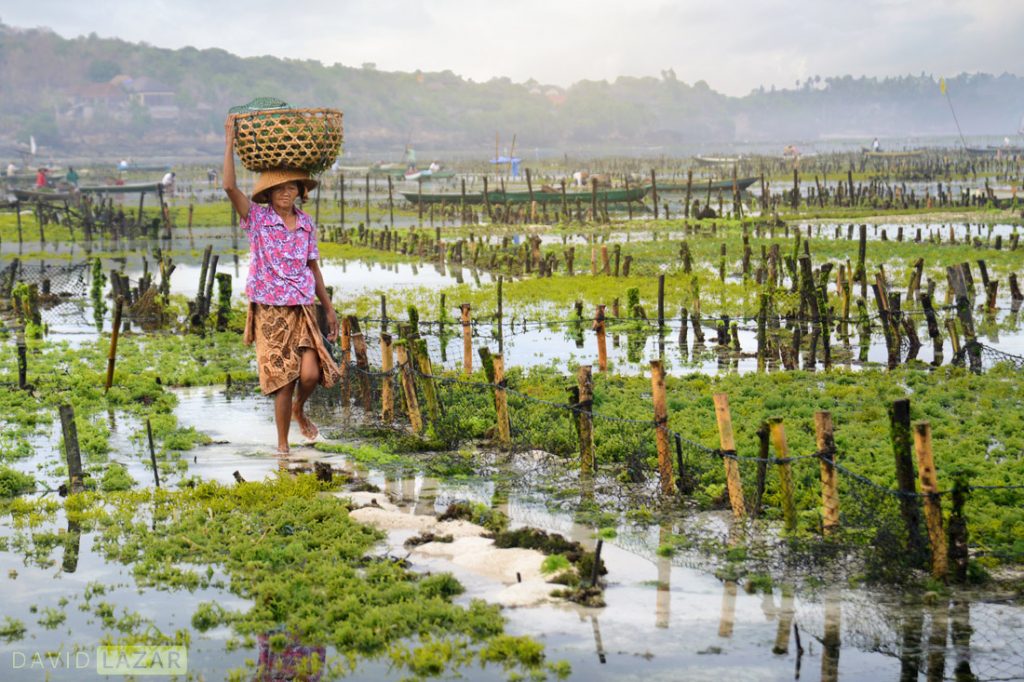 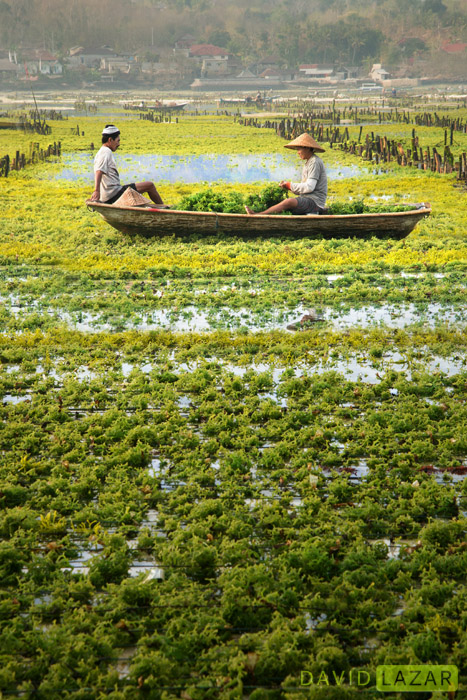 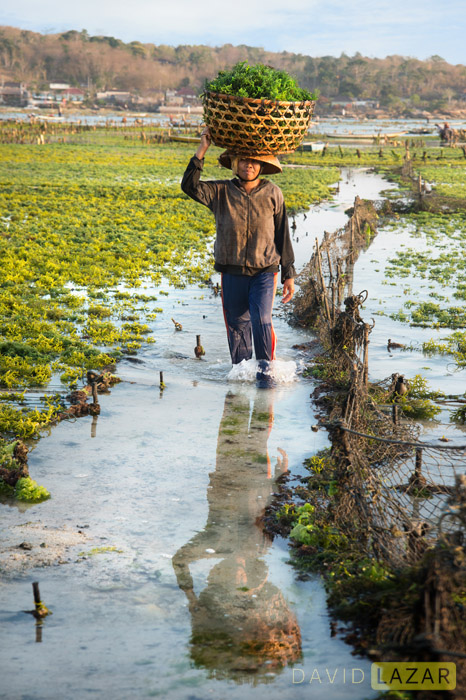 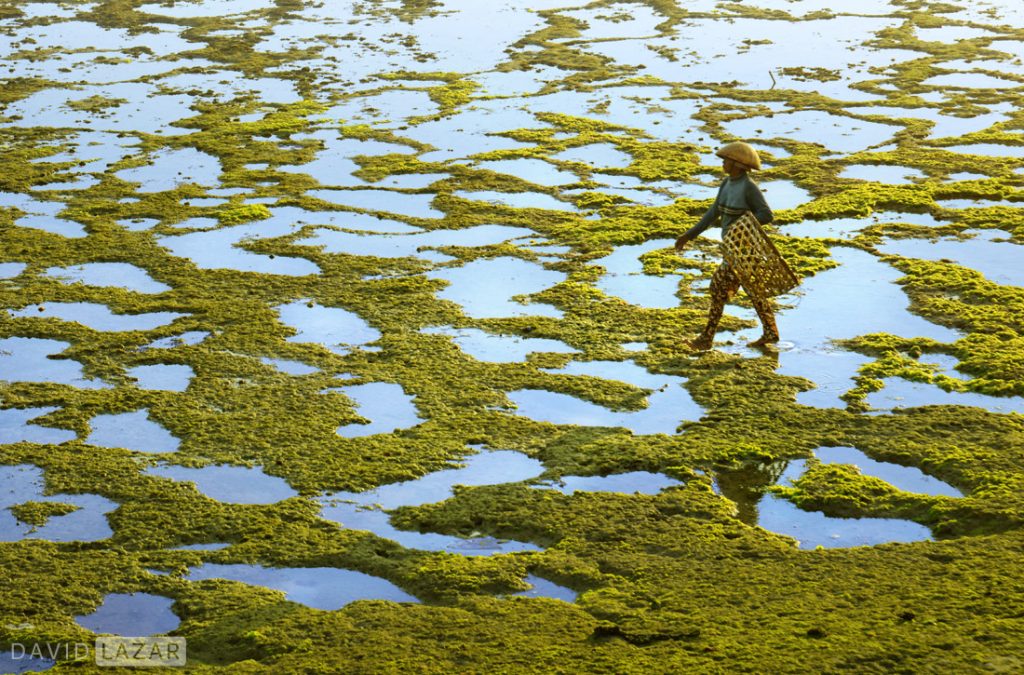 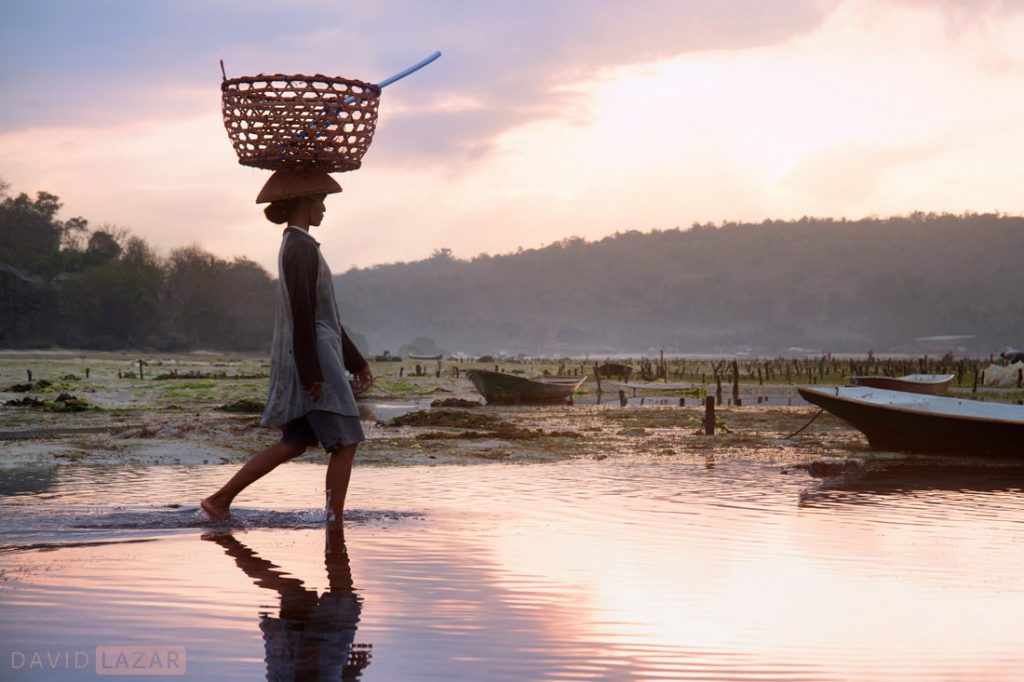 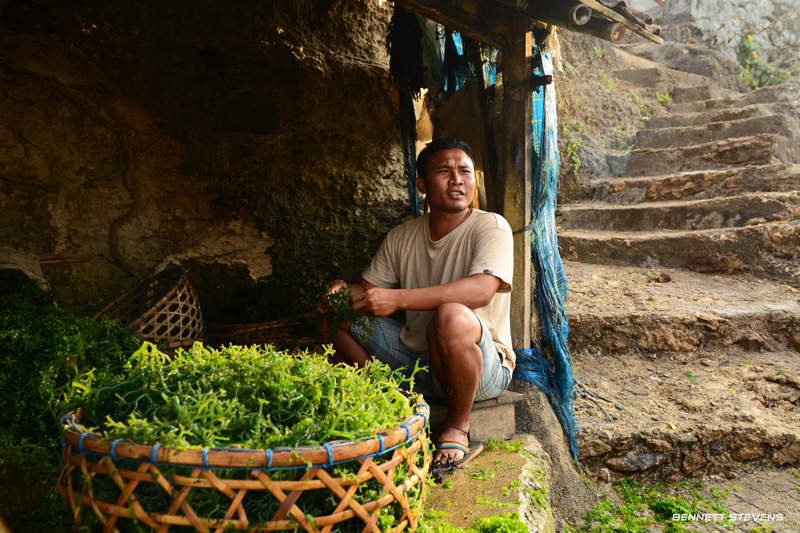 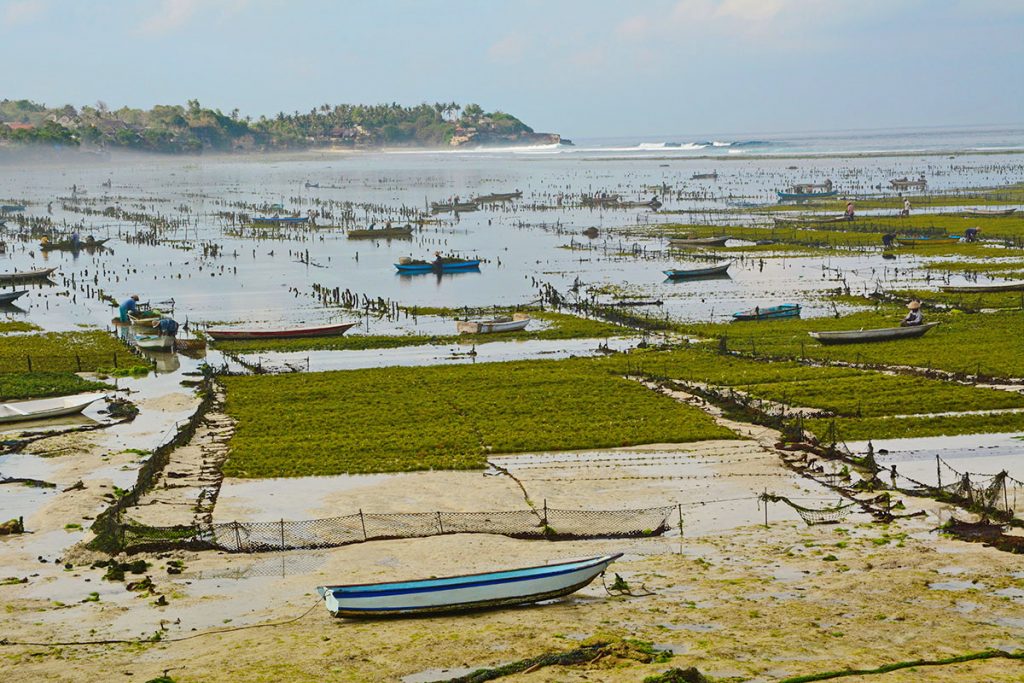 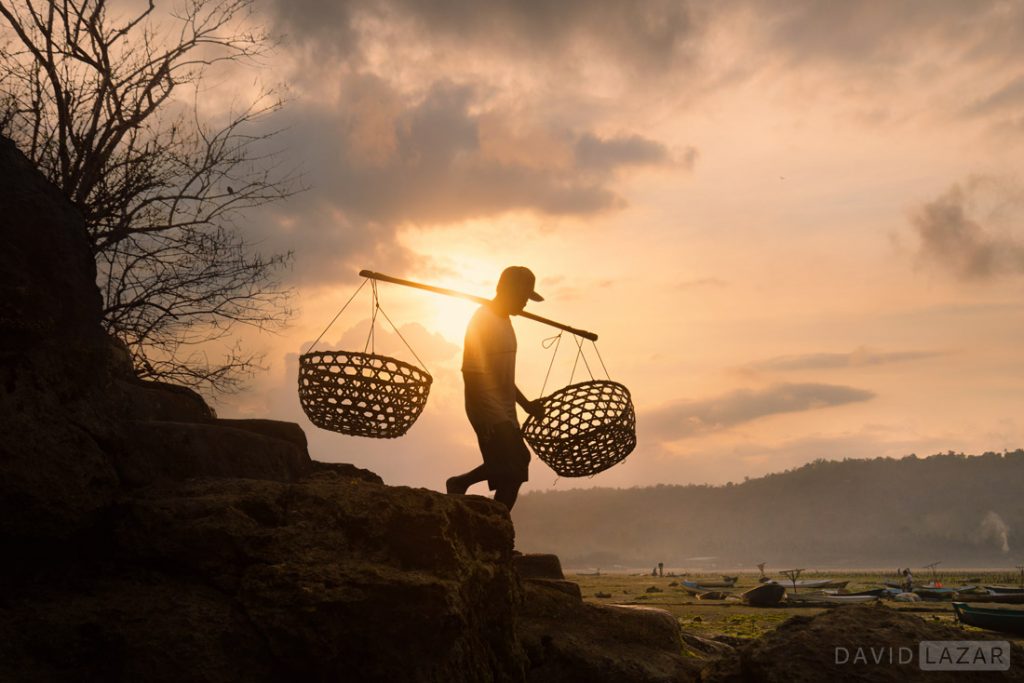 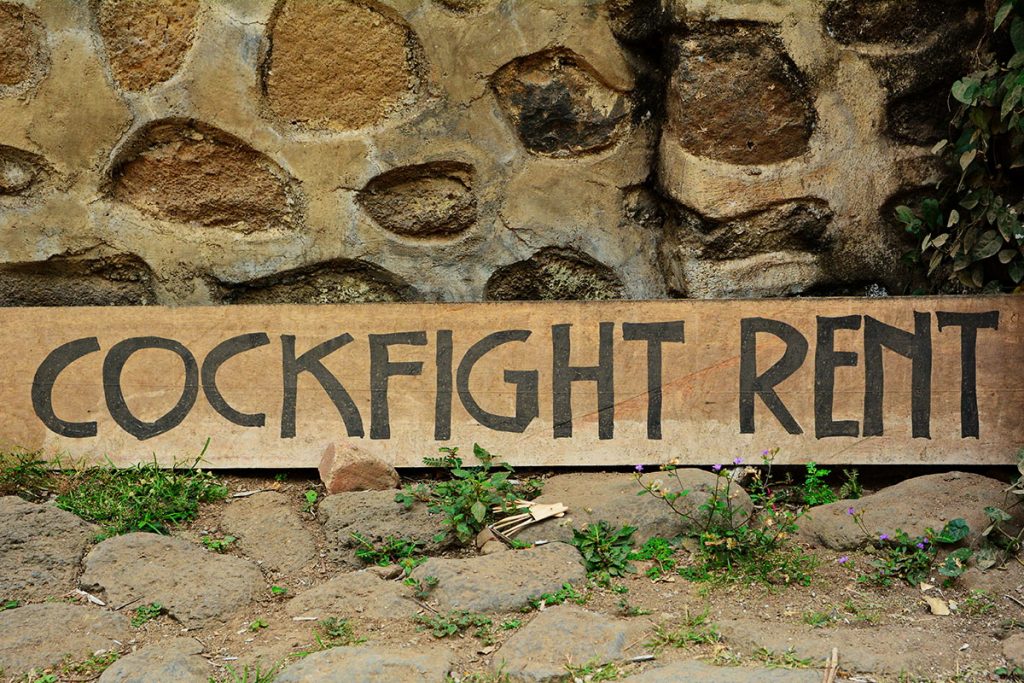 Be sure to check out the details of our November 22 – Dec 3, 2020 Bali Photo Tour Workshop, and better yet, go ahead and sign up!