There are no bad photographs. That’s just how your face looks sometimes. – Abraham Lincoln

As befitting the namesake of this mighty blog, we thought it was high time to share some funny photography quotes our crack staff was able to dig up from fine folks at Surveillance Capitalism. They did not find a whole lot, sadly. Whether this is because serious photographers have no sense of humor, or because our crack staff was on crack at the time, I’m not sure.  All I know is my attention deficit level is far too high for me to do my own research, so am relegated to work with whatever they blithely toss onto my tin can of a desk.  Nevertheless, we think you may get a chuckle or two, perhaps 3 in some cases, and more importantly, we will have met our monthly quota of blog glob. It’s a win-win.! 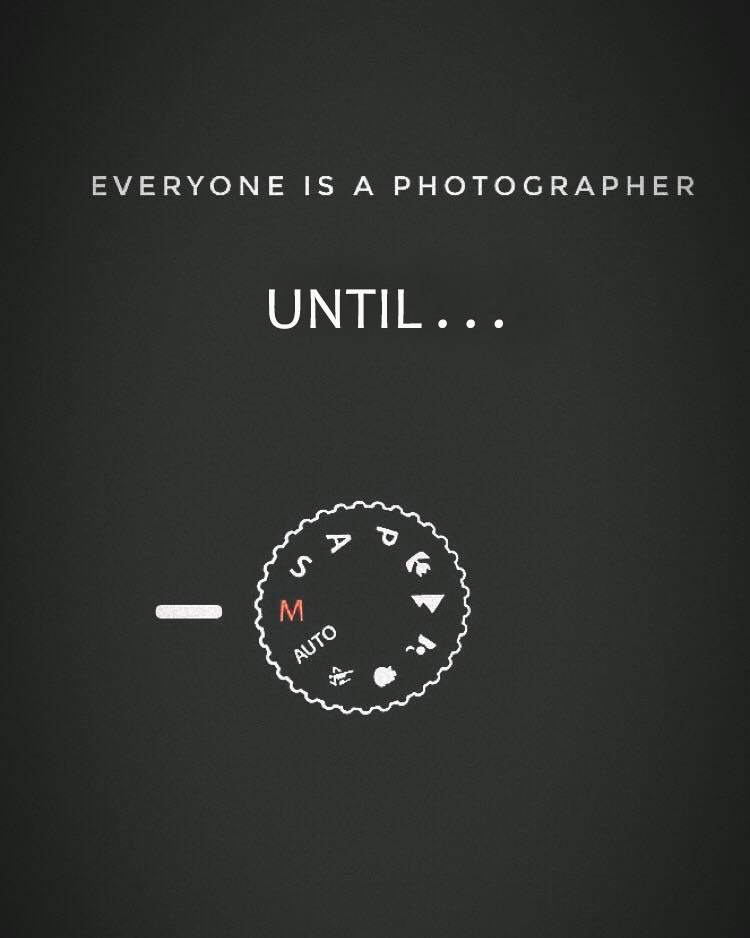 The most common themes in photographer irreverence are defensive offensives launched against those who either purposely or out of ignorance insult them.  Them being us. The main insults take two basic forms:

The first ‘Camera as Artist’ salvo was penned in San Francisco a century ago by the world renowned, Anonymous. It goes a little something like this:

One day Jack London went to have his portrait made by Arnold Genthe, a noted San Francisco Photographer. London and fellow bohemian Genthe, were friends. London began the session with effusive praise for Genthe and his ability as a photographer :

You must have a wonderful camera…It must be the best camera in the world… You must show me your camera.

Genthe held his tongue and with his standard studio camera snapped what has since become a classic picture of Jack London. When the sitting was finished, Genthe finally released his tongue:

I have read your books, Jack, and I think they are important works of art. You must have the best typewriter in the world. You must show it to me.

This Anonymous Jack London credit the camera bit has been “borrowed” many times and “updated”. Here’s one example plus a couple of riffs: 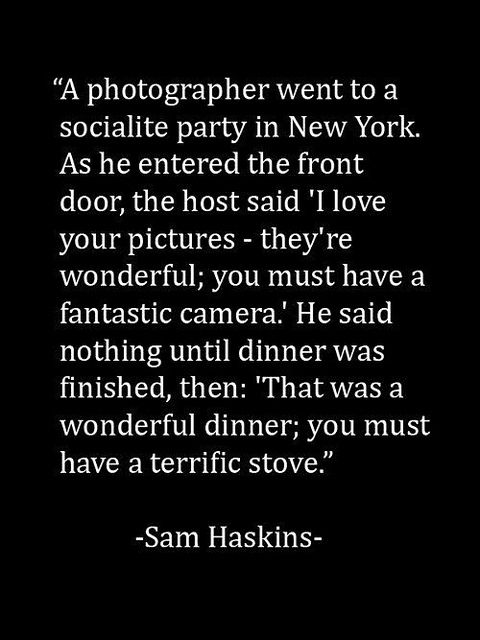 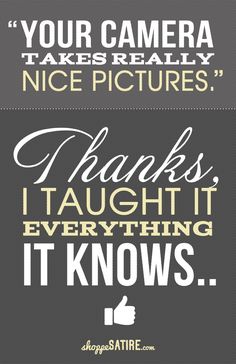 Now, while novices and intermediate photographers may not yet understand the fact that getting great images doesn’t depend on having great equipment, advanced shooters and pros certainly do.  But does that prevent many of them from spending lavishly on the latest gear every chance they get? NO!  People love their toys, at least while they’re still new.

Here’s several irreverent push-backs that fall into the ‘Photographer as Worthless Hack’ category:

A friend of mine who teaches film-making at a well-known school was approached by a noted brain surgeon who asked that he be given a two-week crash course in film-making because of a film he wanted to produce. “Okay,” my friend said, but I won’t charge you for the course if you’ll swap me a two-week course in brain surgery. That’s something I’ve always wanted to do.” (Excerpted from the Professional Photographer’s Survival Guide, by Charles E. Rotkin) 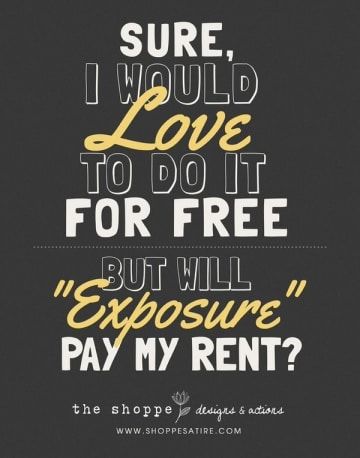 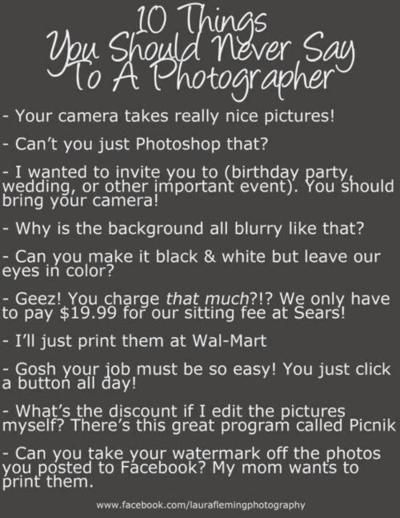 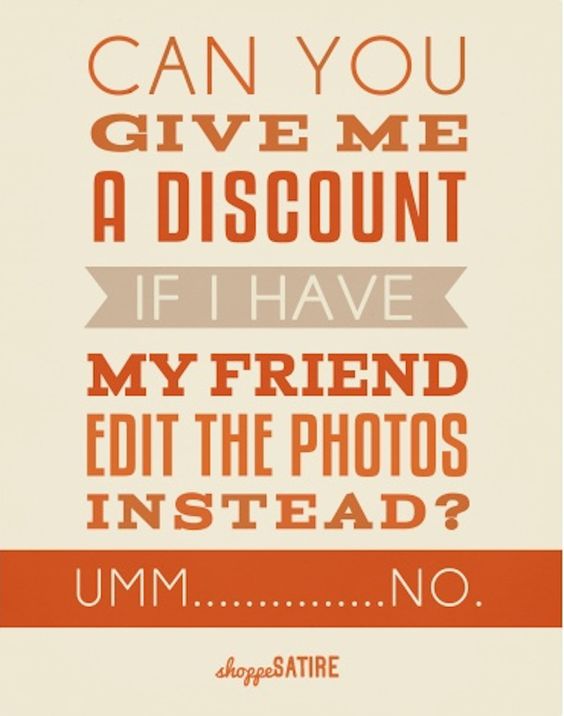 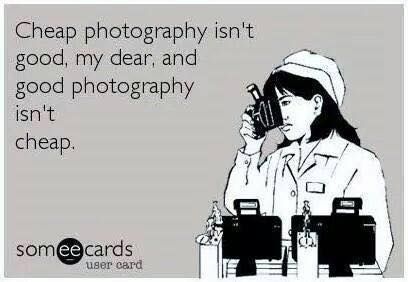 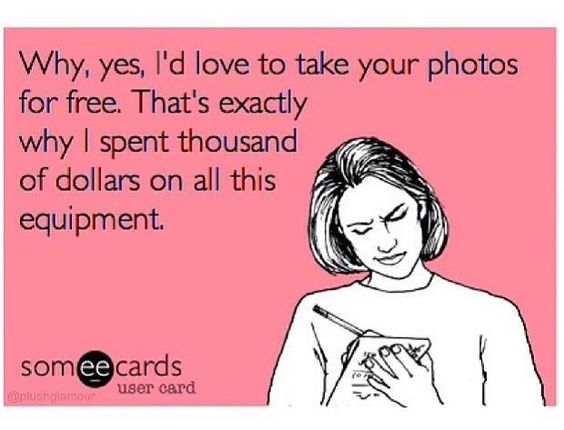 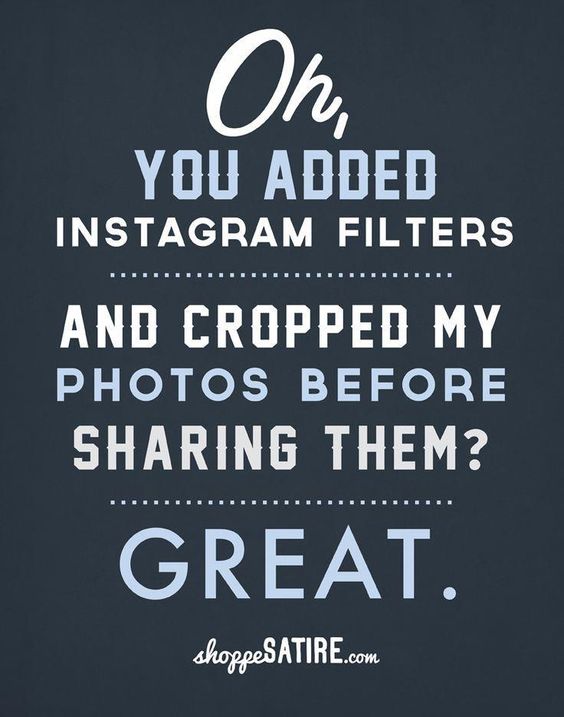 The quickest way to make money at photography is to sell your camera.  – Anonymous

The rarest thing in the world is a woman who is pleased with a photograph of herself.  – Elizabeth Metcalf

From the Equipment’s Point of View: 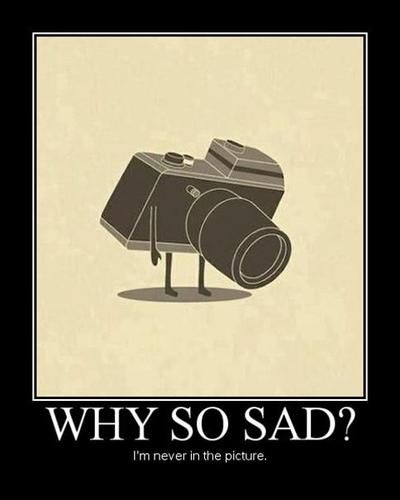 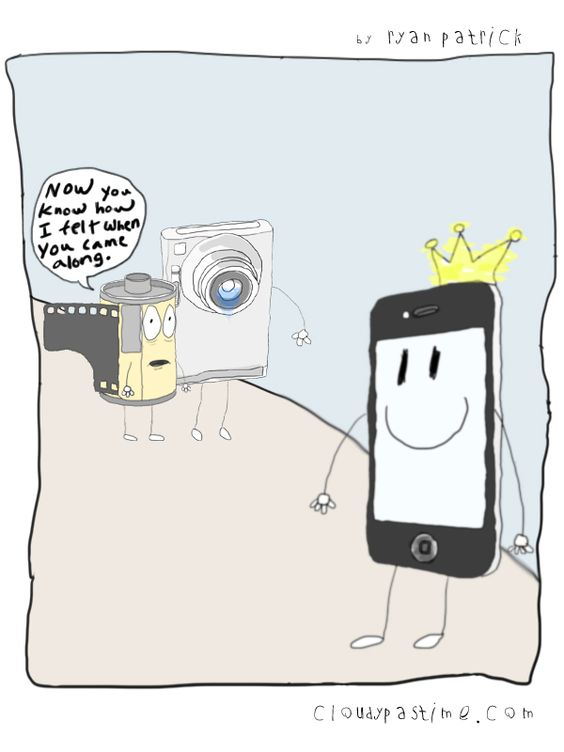 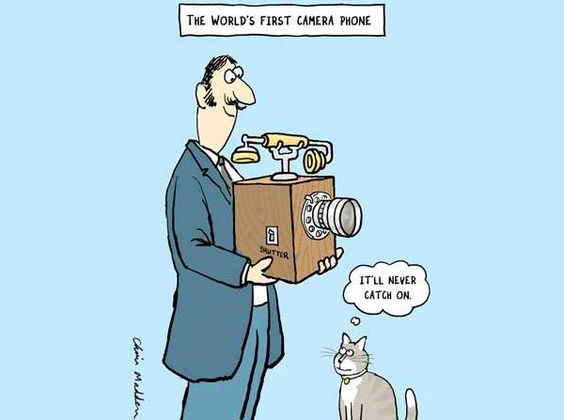 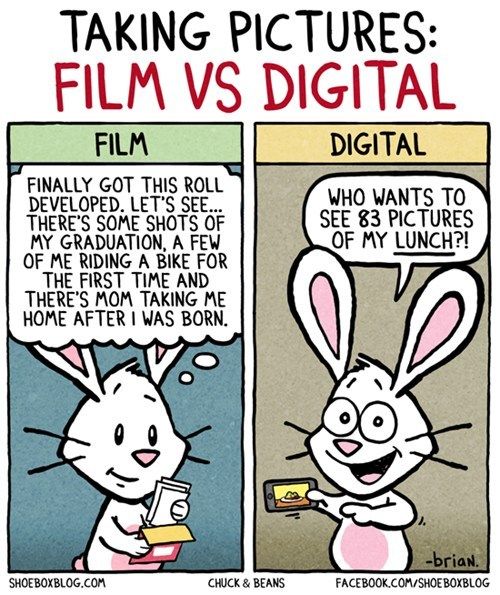 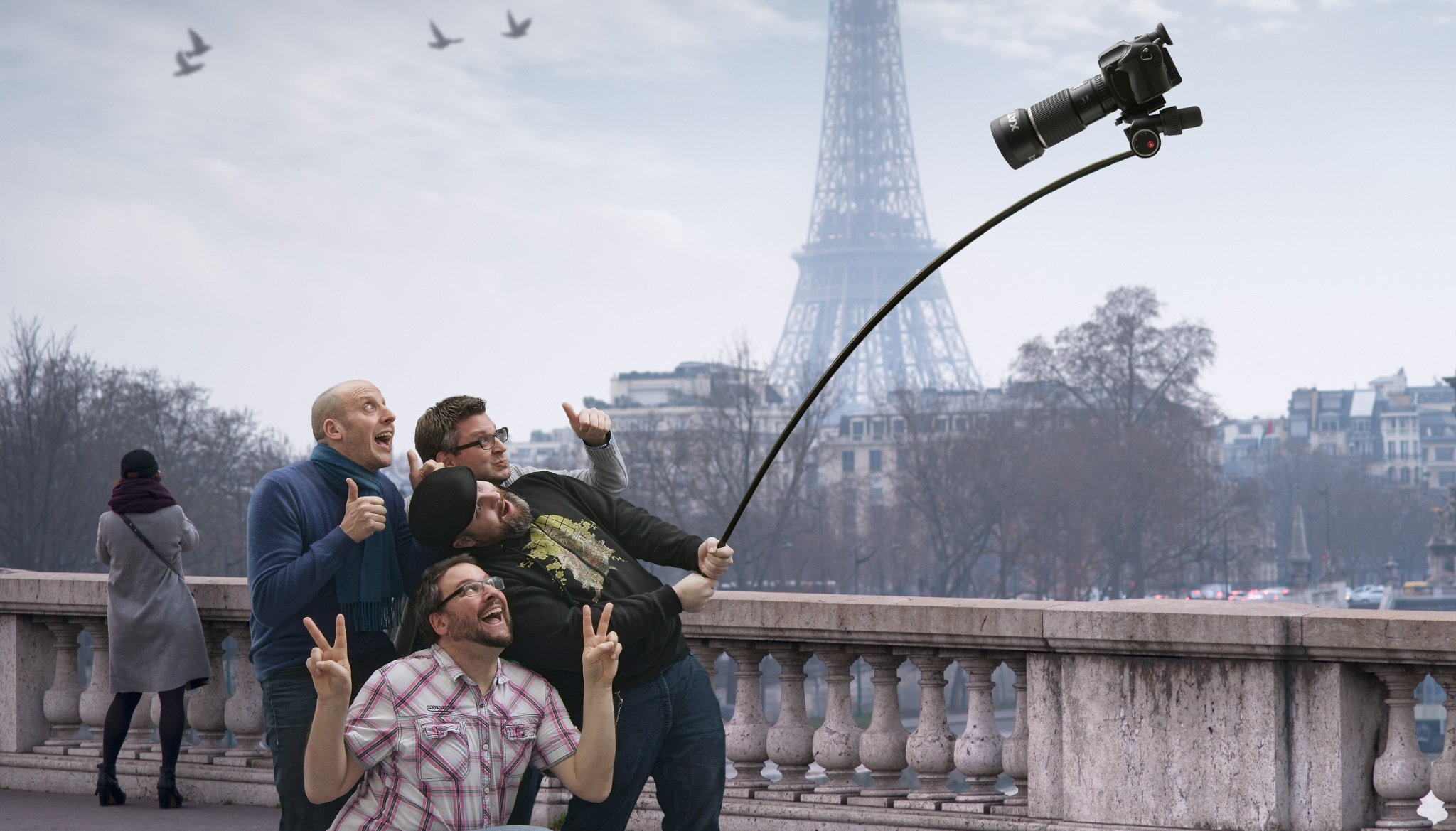 The Darker Side of Light: 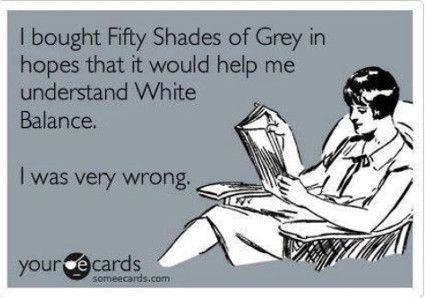 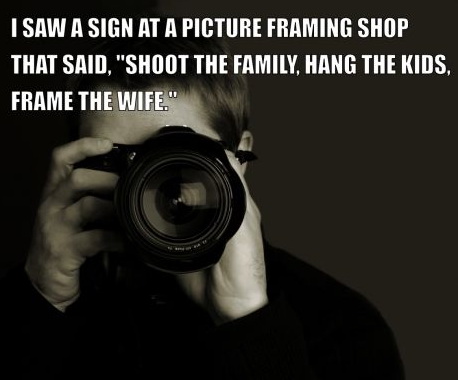 “If you saw a man drowning 20 feet away and you could either save him or photograph him…what lens would you use?” – Anonymous

On being asked what he would save first if his house were on fire, his wife or his negatives, Ansel Adams responded: “My wife, of course. Then I’d have her get the negs out!”

A photographer from a well know national magazine was assigned to cover the fires at Yellowstone National Park. The magazine wanted to show some of the heroic work of the fire fighters as they battled the blaze. When the photographer arrived, he realized that the smoke was so thick that it would seriously impede or make it impossible for him to photograph anything from ground level. He requested permission to rent a plane and take photos from the air. His request was approved and arrangements were made. He was told to report to a nearby airport where a plane would be waiting for him. He arrived at the airport and saw a plane warming up near the gate. He jumped in with his bag and shouted, “Let’s go!”

The pilot swung the little plane into the wind, and within minutes they were in the air. The photographer said, “Fly over the park and make two or three low passes so I can take some pictures.” “Why?” asked the pilot. “Because I am a photographer,” he responded, “and photographers take photographs.” The pilot was silent for a moment; finally he stammered, “You mean you’re not the flight instructor?” – Anonymous 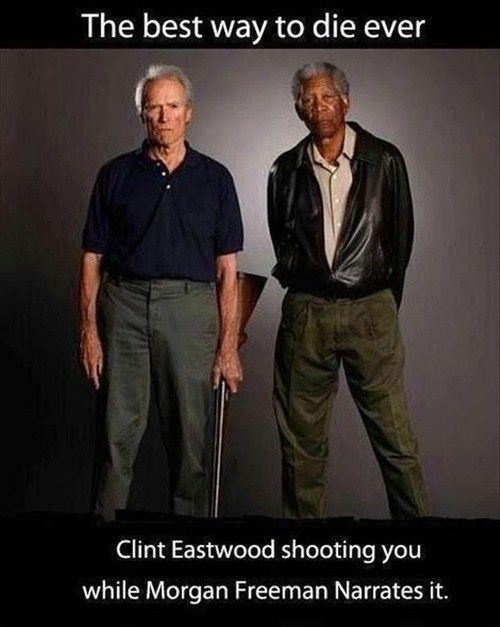 Please check out our photography workshop trips, which always provide a lot of laughs along with everything else!